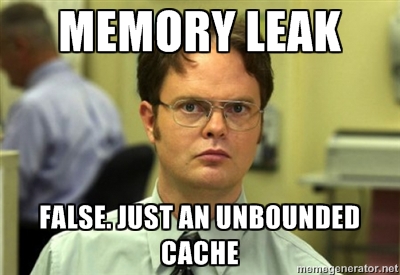 Since I knew roughly which code path must have the leak, I first examined it manually. I could not see where memory wasn't being given back. I needed to instrument the process as it was running in order to find the leak.

This set of instructions from Otto Moerbeek was my guide. As per his guide, you have to rebuild libc with MALLOC_STATS enabled. This enables statistics collection that is used later on.

Edit /usr/src/lib/libc/stdlib/malloc.c and define MALLOC_STATS (it's actually already in the file, just uncomment it). Now rebuild and install libc.

Other things to know before starting:

Start a shell and run the binary. In my case, I run snmpd with -d to keep it in the foreground. This makes it really easy to kill (with Ctrl+C) and relaunch (with up arrow, "enter"). It also causes anything written to stderr to be sent to the terminal which will be useful later on.

In another terminal I run ps(1) and look for the PID of the unprivileged process (the process that executes the code path where I suspect the leak to be).

Now run the debugger, pointing it to the binary on the file system so it knows the makeup of the process you will eventually attach it to.

Now there's some decisions to make. You have to tell the debugger which part(s) of the code you want to inspect. You do that by setting breakpoints. When program execution hits a breakpoint, the debugger stops the process — that is, it doesn't quit the process, it just freezes it in time — and allows things like variables, memory locations, registers, etc, to be examined as they are at that exact point in time. Since I have an idea of where in the code the leak exists, I'm setting a breakpoint on a particular function so that when it gets called, the debugger will stop.

See how gdb knows the filename (mib.c) and line number (2179) of the function? That's why you need a binary that's not stripped.

As soon as you "attach" to a process, gdb stops the process; it's frozen. Allow the process to continue running by issuing the "continue" command to gdb.

At this point gdb appears to have hung. This is expected. gdb will not return to the "(gdb)" prompt until a breakpoint is hit.

Now it's time to trigger the memory leak. In my case, I did some walks of the pfTblAddrTable and watched the SIZE/RES of PID 1184 climb. With the leak triggered, use the MALLOC_STATS capabilities to get more information.

At this point I'm back at the "(gdb)" prompt and the process is frozen because I hit the breakpoint that I set above — walking pfTblAddrTable causes the mib_pftableaddrs function to be called.

Use gdb to call the malloc_dump() function in libc. Note the integer argument to the function is the file descriptor where the output should be sent (this is relative to the process, not to gdb!). In my case, since snmpd is running in the foreground and sending stderr to the terminal, I give an argument of "2" (ie, stderr).

The snmpd terminal immediately shows the malloc stats. The most interesting part is at the bottom, the leak report.

As Otto explains, the f column contains the address of the code that allocated the memory. From this report we can see that the code at 0x1c015786 has caused 10 leaks of size 9984 pages. That's our culprit. Use gdb to find out what that code is:

There we go. gdb has identified the pfr_buf_grow() function in pf.c.

Ok.... that was the easy part. gdb can't tell you where the memory should be freed, it can only tell you where the memory is being allocated. You as the programmer have to understand the program flow and where it makes sense to call free(). What this gives you is a place to start working backwards from. What calls pfr_buf_grow()? Are those functions missing calls to free()?

gdb can be useful in the investigation at this point too. When the program flow hits a breakpoint and you get the (gdb) prompt back, you can "step" along through the code (or "next", if you don't want to step into any functions on that particular line of code).

For the leak in snmpd, I was able to step/next my way through the function where I had set the breakpoint and realized that program flow was actually different than how I had calculated it in my head. Once this was clear, I realized where I needed to add a free().