Although I wasn't actively blogging this year, I've still been tracking views on the site and keeping an eye on number of visitors. I am looking forward to blogging again in 2015 so I wanted to collect the 2014 viewership statistics so I had something to compare to at the end of 2015.

Despite the lack of new content, I'm pretty happy that people are reading the existing articles and continue to post comments and email me questions. Please keep them coming!

Once again these stats are courtesy of Google Analytics. If you compare this chart to the 2013 equivalent, you'll see that Google has changed some of the metric names. Visits are now called Sessions and Unique Visitors are now Users. And like last year's chart, the first number in gray is the current year's number, the second number the previous year.

While the number of Users and Sessions grew at a slower rate than in 2013, they still grew! Very cool. 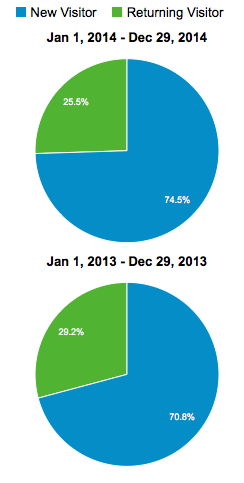 As was the case in 2013, the users visiting the site are primarily made up of brand new visitors. It also looks like brand new visitors made up a bigger piece of the pie than last year. I do have some analytics on the site to track what social platforms visitors are using to reach the blog but the numbers I get out of that analytics tool don't come close to the number of visitors that Google Analytics reports so unfortunately the path that most visitors take to reach this site is a mystery to me right now. 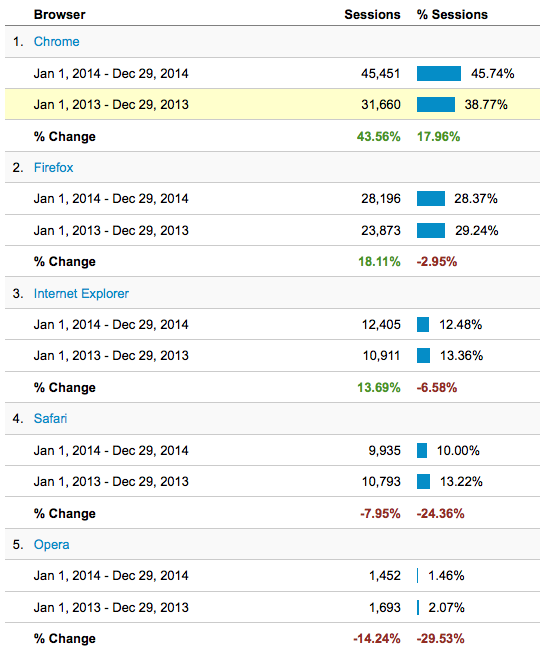 The top 5 browsers to hit the site looks an awful lot like last year in terms of rank. Chrome jumped up big time in terms of popularity with the remaining 4 of the top 5 losing some ground. I was most surprised that Safari lost as much ground as it did because as near as I can tell, that metric includes desktop and mobile Safari. Does that indicate less users on Apple iOS devices visiting the site? Let's look at the operating system numbers! 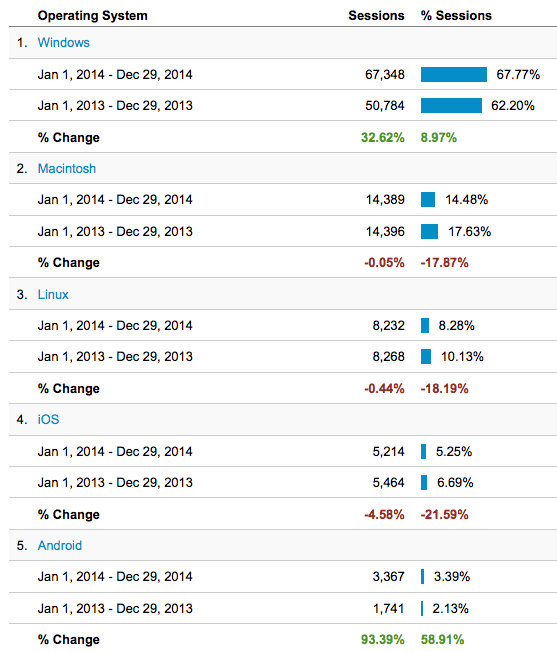 The top 5 OSes again, very much the same ranking as 2013. As predicted by the decline in Safari users, the number of visits from iOS devices is actually down. Mac OS holds a lead over Linux and lastly, look at Android! Huge increase of visits from Android devices.

Two platforms which didn't make the top 5 (and wouldn't fit into the screenshot) are Windows Phone and Blackberry:

Still less than 100 sessions (aka, visits. Remember, sessions are not the same as users) to the site from Windows Phone. And Blackberry, unexpectedly, is stagnant.

So there we go, another year of blogging (sorta) in the books. Thanks to everyone who reads my articles and posts comments. I look forward to writing again and interacting with you all in 2015!