I debated whether to write an article like this. It seems to be the "in vogue" thing to do if you're a blog author but I wasn't inclined to do it until I started looking at the data (I heart data). When I started looking at the data, I saw not only number of visitors and so on to the blog, but a breakdown of browser versions and operating systems (thank you Google Analytics for the rich reports). As is often the case, your data set can tell you more than you initially bargained on.

First, the overall picture of visits to the blog: 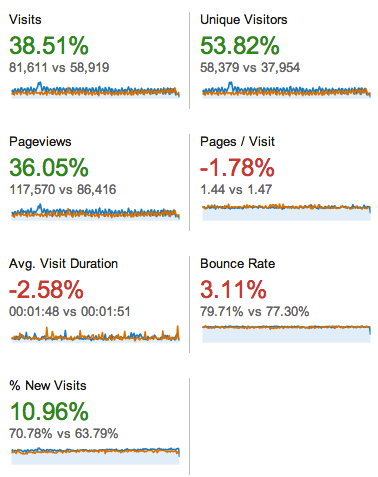 38% more overall visitors and 53% more unique visitors in 2013. Pretty cool! And over 58 thousand people put eyes on my blog in the past year. That's something I hope to build on in 2014.

The first unexpected data point I saw is that in 2013, the blog saw more new visitors than in 2012. That means the readership is expanding to include new people which is excellent.

Next up is browsers. Chrome has a pretty commanding lead at 38% which did surprise me a bit. I guess I've lost touch with the browser wars, but my thought was that Firefox would be on top. Looking closer though, Chrome was in second place last year at 33% compared to Firefox's 36%. The run up of Safari use is pretty interesting too. Almost 70% more visitors this year used Safari to access the blog. Will this be reflected in the operating system numbers? :-) 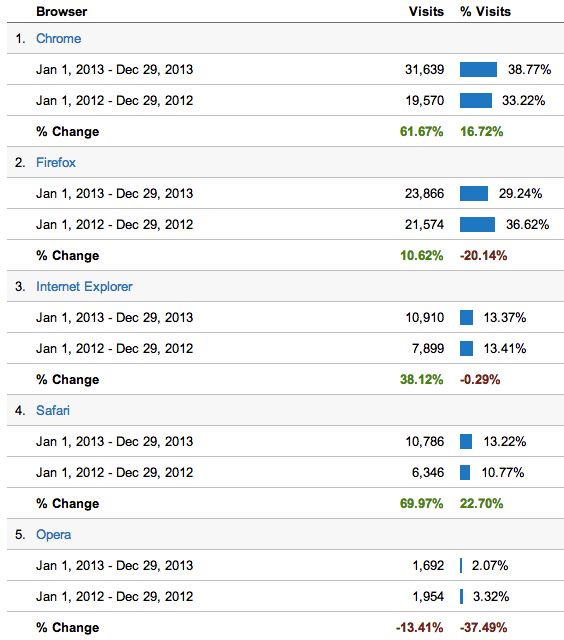 No big surprise as far as the dominant position in the operating systems with Windows on top. Look at the change in the #2 and #3 positions. Last year, Linux and Mac OS were neck and neck and 15.13% and 15.72%, respectively. This year Mac OS use was over 7% higher than Linux. I'm going to skip iOS and Android and mention them as part of the next graphic. Lastly, I was pleasantly surprised to see FreeBSD and OpenBSD make the list although sad to see OpenBSD numbers trending down.

Rounding out the reports that I ran for 2013 is mobile operating systems. I'm not surprised that iOS is in the #1 spot. The YoY growth of iOS (55%) does surprise me, especially compared to YoY growth of Android (7%). Big gap. Blackberry and Windows Phone barely register. 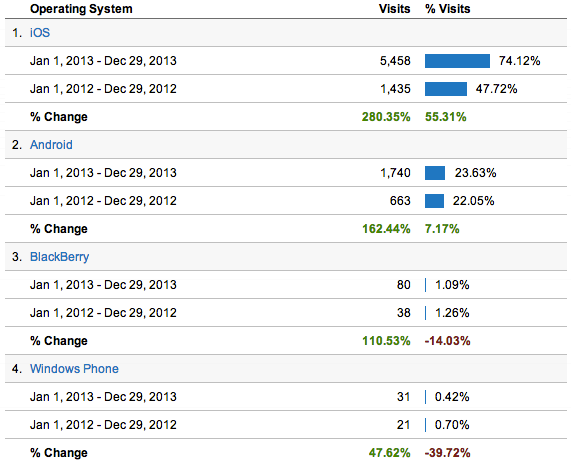 I suppose when considering these numbers one should keep the blog's target readership in mind: technical-minded readers who have interests in the areas of data center, security, open source and UNIX. Unfortunately, Google Analytics doesn't yet have a report that can give details on visitors' profession or skills :-)

Thanks to everyone who read and commented on the blog in 2013. Let's keep the discussion and learning going in 2014!