MPLS "No Label" vs "Pop Label"

I like MPLS. And I don't necessarily mean as a solution to solve a problem, but as something to configure in the lab. It's fun to build things that do something when you're done. Setting up OSPF or EIGRP and being able to traceroute across routers is meh. But configuring MPLS with all the associated technologies — an IGP, LDP, MP-BGP, — and then getting all of them working in unison... when you get the traceroute working, it's rewarding.

Here's something to keep an eye out for when you're troubleshooting MPLS: An LFIB entry (that is, the Label Forwarding Information Base) that states "No Label" versus one that states "Pop Label". These mean very different things and can be the difference between a working Label Switched Path (LSP) and a non-working LSP.

Here's the topology I'm working with:

I'm going to examine traffic going from R8's 10.1.8.8 address and destined to R21's 10.1.21.21 address (in other words, traffic flowing counter-clockwise on the diagram). When R8 does a traceroute to R21, those packets have two MPLS labels applied to them:

The outer label gets the packet 90% of the way to the destination. It's typically swapped at every MPLS hop along the path. For instance, in my lab R6 is using label 18 to get packets to R4. When those packets reach R1, R1 swaps 18 with 16. This continues on down the line until the packet reaches the "penultimate router". Penultimate means "next to the last". Since R4 is the last router on the LSP between R7 and R4 that makes R5 the penultimate router.

In a working state, the penultimate router performs a pop of the outer label. It peels the outer label off, discards it, and forwards the packet onwards with just the inner — now the only — label. The ultimate router — in this case, R4 — receives this MPLS packet with the single label, does a lookup for the label in the LFIB and finds the VRF and adjacency information that it uses to forward the packet on to R21. 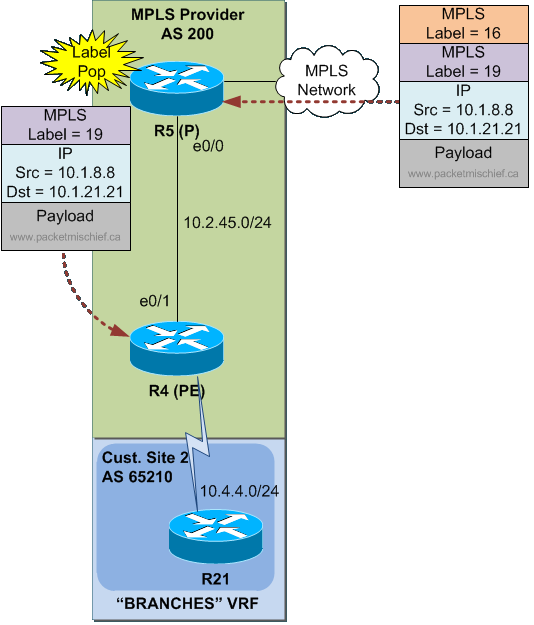 The key to this being successful is that R5's LFIB entry for label 16 tells it to perform a Pop Label operation.

The non-working state is when R5's LFIB entry for label 16 instructs it to perform a No Label operation.

No Label literally means to strip all of the MPLS labels off the packet and forward the raw IP packet (in this case it's IP). 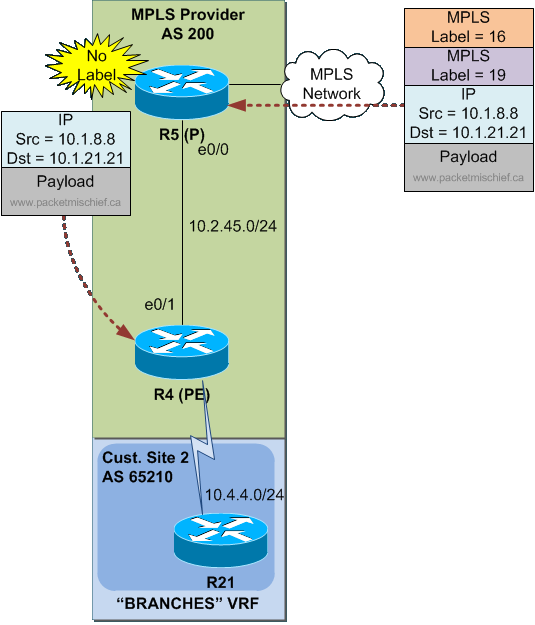 What's wrong with this picture now?

The problem is that the ingress interface on R4 — eth0/1 — is in the global VRF but 10.1.21.21 exists in the "BRANCHES" VRF so the route lookup fails and end-to-end connectivity is broken.

Why is R5 choosing No Label instead of Pop Label?

The short answer: because R4 stopped advertising a label to R5.

The Pop Label action is actually signalled from the ultimate router (R4) to the penultimate router (R5). Put another way: R4 tells R5 to perform a pop. It does this by advertising a special label value called the "implicit-null" label. When R5 receives this, it knows it needs to perform a pop operation. If R5 doesn't receive this label advertisement, it has no choice but to pull all labels off and send the raw IP packet.

If you sniff the wire, you'll see that the implicit-null label actually has a value of "3". This is also set forth in RFC 3032 - MPLS Label Stack Encoding, section 2.1.

When troubleshooting a broken LSP, remember to check the LFIB entries very carefully and pay attention to any entries with "No Label" as the outgoing label.