This is the third post in my series on virtual routing. Other articles in the series are

Now, you might think that since you're connecting your VRFs together via a common area that you're increasing your risk of traffic crossing between VRFs (ie, guests being able to access your corporate network resources). The natural reaction is to stuff some firewalls in the mix. Filter everything in and out of the VRFs! Firewalls will keep us safe! Keep in mind though that each VRF only forwards traffic toward a destination if it has a route for that destination. As long as routes are being filtered properly in the shared services area, VRF A will not contain routes for networks in VRF B (and vice-versa). If a user sends a packet into VRF A with a destination address belonging to a network in VRF B, the worst case is that the packet will follow the default route in VRF A (which probably leads towards the Internet exit point in that VRF) and best case it will just be dropped because there is no matching route. Either way, even without a firewall, traffic does not cross from A to B.

The basic topology for this shared services module is shown here: 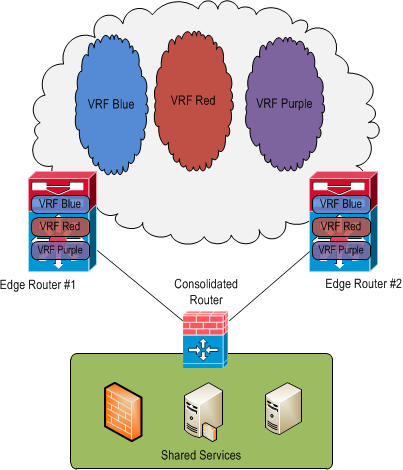 The consolidated router in this topology is actually a Juniper SRX firewall running Junos and will be performing route exchange, route filtering, and firewall duties all in the same physical box and in a single firewall instance.

The consolidated router is configured with one routing instance for each VRF in the network. Each instance is of type "virtual-router" and is used to exchange routes with the VRFs in the network as well as containerize those routes. 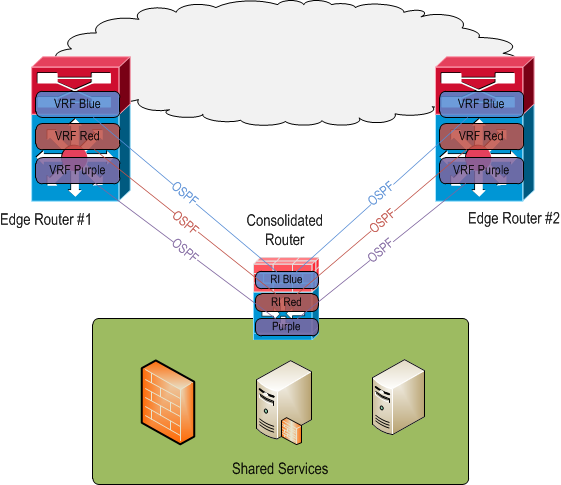 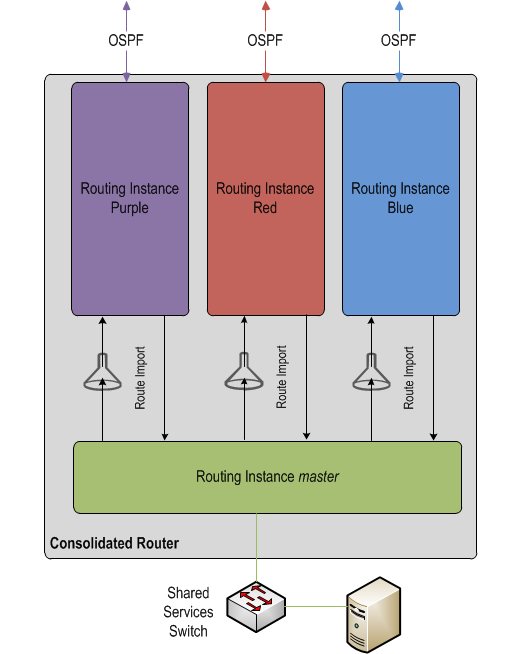 OSPF has no ability to filter outgoing route updates. The edge routers could be configured with distribute lists to prevent incoming route updates from entering their routing tables however this would not prevent the prefixes from being present in the OSPF link state database. More importantly, this method creates two points of management for route filtering vs. a single point on the consolidated router.

BGP may be a better protocol to use between the consolidated router and the edge routers as it would more easily allow filtering of sent and received prefixes. It would probably remove the need for routing instances at all (thus making the design more in line with Cisco's validated design of having a single routing table in the shared services area). However I'm basing this post on a real life deployment which actually used OSPF.

By employing routing instances on the consolidated router it's possible to:

On top of this, a firewall policy will be deployed that permits only specific traffic based on typical 5-tuple information. So even though a VRF has full routes for the shared services area, the firewall policy will control exactly what traffic is allowed into (and out of) the area.

At this point the blue routing instance should contain all of the routes from the blue VRF.

The interface facing the shared services area is a regular interface with no associated routing instance; it's part of the default instance (named "master" on the SRX platform).

At this point the "master" routing instance only contains the "direct" route for the /24 network configured on ge-2/0/0.0.

Now, to import routes into "master" from "blue", configure an appropriate policy statement that selects routes in "blue" and apply that statement as an import policy on the "master" routing instance.

This config will suck all the routes from the "blue" routing instance into the "master" instance. To be a little more granular, a prefix-list could be used in the "from" stanza of the policy-statement to only permit specific prefixes but that would limit reachability to only a portion of the blue network. The default_deny term is important; you'll want to make sure that's the last term in the policy-statement.

Now to do the reverse and import routes into blue from master. This is where the filtering becomes relevant.

This prefix-list specifies the network(s) that belong to the shared services area and is used to filter the list of routes imported into blue.

The above chunk selects prefixes in the master table that match the prefix-list.

And this chunk applies the policy in order to:

At this point traffic should flow bidirectionally between shared services and the "blue" VRF while at the same time preventing traffic flow between "blue" and any other VRF.